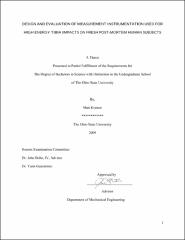 Injury to the medial collateral ligament (MCL) and anterior cruciate ligament (ACL) are common when knees are subjected to loading from the lateral direction. These types of injuries occur often in sports and are also common in vehicle-pedestrian collisions. Previously, the Injury Biomechanics Research Laboratory (IBRL) at The Ohio State University has developed instrumentation for anterior tibia impacts, which included instrumentation to measure the posterior cruciate ligament (PCL) stretch. The objective of this research was to take knowledge gleamed from the frontal testing to develop an instrumentation technique for lateral impact testing of the knee, focusing on MCL and ACL stretch and injury. The goal of this study was to develop and verify instrumentation that can be used in future studies on ligament tears and avulsions on post-mortem human subjects (PMHS). This research also looked to accurately measure the angle between the tibia and the femur during impact and identify the time of injury for both ligament and bone failures. Instrumentation techniques using micro-differential variable reluctance transducers (Micro-DVRTs) were used to measure stretch in the ligaments due to the confined space within the knee joint. Accelerometers, angular rate sensors, high-speed cameras, and load cells were used to determine the angle of the femur with respect to the tibia and to measure force of impact. The initial trials included 4 PMHS denuded legs being laterally rotated by gravity until the thigh impacted a load plate causing loading across the knee. During the tests, all mounted instrumentation on the leg remained fixed and recorded the motion of the leg and the stretch of the ligaments. From these initial tests, suturing the DVRT barbs to the ACL provided repeatable ACL displacement measurements. When the MCL is well defined, suturing the DVRT barbs to the MCL also provided repeatable MCL displacement measurements. With both MCL and ACL DVRT signals, the time of injury can be determined accurately. It was also determined that angular velocity may be a predictor of ligament injury that could be used in future work if more trials are performed and found to support this hypothesis.