Competition for Open-Access Resources: A Class Exercise that Demonstrates the Tragedy of the Commons 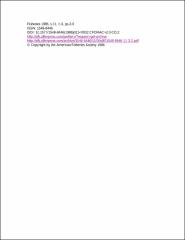 Open-access resources, such as fisheries, often suffer from overexploitation due to competition among individuals. To help students appreciate this phenomenon, we developed a laboratory exercise that uses a computer model of a commercial fishery to illustrate the inevitability of overexploiting open-access resources. Our model contained two identical populations that were fished simultaneously: one on an individual, competitive basis and the other on a collective, cooperative basis. Both populations were governed by identical relationships for recruitment and catch-per-effort, and had constant growth and natural mortality rates. Competition within the individually-run fishery invariably led to population collapse whereas the cooperative group usually maintained sustained yields. This exercise demonstrated that optimal resource use was impossible in a purely competitive fishery and helped students understand fish population biology and commercial fishing strategies. The exercise can show how changes in regulations or population parameters influence yields from a fishery. It can be adapted for use in workshops and other professional settings, even for participants with little background in fisheries.

This work was supported in part by the Ohio State University, Department of Zoology, and by the University of Wisconsin Sea Grant Institute under grants from the National Sea Grant College Program, National Oceanic and Atmospheric Administration, U.S. Department of Commerce, and from the State of Wisconsin. Federal grant NA84AA-D-00065, project R/GB-24.