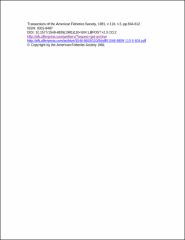 To better understand why stocked esocids survive poorly, we estimated mortality rates of tiger muskellunge(F1 hybrid of female muskellunge Esox masquinongy * male northern pike E. lucius) that were placed into two Ohio reservoirs (mean fish total lengths, 171 and 179 mm; 62 fish per hectare). Because pond experiments showed that hybrids stocked at night experienced mortality rates as high as those released during the day, we stocked tiger muskellunge into lakes during the day. Mortality of stocked hybrids (estimated by catch per effort of electrofishing) exceeded 95% within 40 days in both lakes. Population estimates of largemouth bass Micropterus salmoides coupled with stomach-content data revealed that these predators accounted for 26% and 45% of the numbers stocked in the two lakes. In addition, some hybrids died from thermal stress. Improved survival of tiger muskellunge should result if they are stocked at lengths greater than 250 mm to reduce predation losses, and late in fall when thermal stress is reduced.

This research was supported in part by funds from the Federal Aid in Fish Restoration Act under Dingell-Johnson Project F-57-R.