The Cost of Dispersal: Predation as a Function of Movement and Site Familiarity in Ruffed Grouse 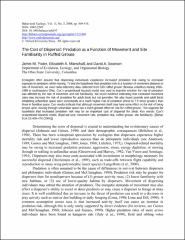 Ecologists often assume that dispersing individuals experience increased predation risk owing to increased exposure to predators while moving. To test the hypothesis that predation risk is a function of movement distance or rate of movement, we used radio-telemetry data collected from 193 ruffed grouse (Bonasa umbellus) during 1996–1999 in southeastern Ohio. Cox’s proportional hazards model was used to examine whether the risk of predation was affected by the rate of movement and site familiarity. We found evidence indicating that increased movement rates may increase the risk of predation for adult birds but not juveniles. We also found juvenile and adult birds inhabiting unfamiliar space were consistently at a much higher risk of predation (three to 7.5 times greater) than those in familiar space. Our results indicate that although movement itself may have some effect on the risk of being preyed upon, moving through unfamiliar space has a much greater effect on risk for ruffed grouse. This supports the hypothesis that increased predation risk may be an important cost of dispersal for birds.

This work was funded by the Ohio Department of Natural Resources, Division of Wildlife and supported by the Department of Evolution, Ecology, and Organismal Biology and the Aquatic Ecology Laboratory at the Ohio State University.