The role of Rb in carrying a successful pregnancy in mice 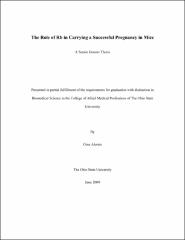 Mutations in the Retinoblastoma (RB) tumor suppressor gene or disruptions in the RB-E2F signaling pathway have been identified in most human cancers. Homozygous deletion of Rb (Rb-/-) in mice causes embryonic lethality by day 15.5 of gestation. Lethality of Rb ablation is not due to an intrinsic function of Rb in the fetus, but rather due to the severe disruption of placental architecture and function (Wu et. al, 2003). In the present study, we show that additional Rb function in maternal tissues other than the placenta is critical for fetal viability. Loss of one allele of Rb (Rb+/-) in the mother resulted in increased fetal mortality upon exposure to the synthetic steroid dexamethasone during pregnancy. Liver-specific deletion of one or both conditional Rb alleles in mothers exposed to dexamethasone also resulted in fetal mortality, suggesting that the liver is an important site of pregnancy-associated Rb function. This study reveals a non-classical role for Rb in the detoxification of harmful substances and preservation of embryonic development during pregnancy.