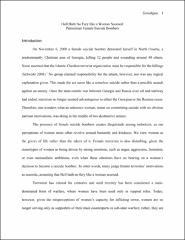 The phenomenon of female suicide bombings is a neglected occurrence around the world, often being cited as the exception rather than rule in concern to terrorist activities. This thesis is a review of the possible theories that explain the existence of Palestinian female suicide bombers in Israel while providing some insight into the recent surge of female suicide bombings in Iraq. Four dominating theories are examined from the works of Israeli terrorism experts including Ariel Merari, Raphael Israeli, Yoram Schweitzer, and Mira Tzoreff. These theories are juxtaposed with a less notable theory that I term, matriarchal conservatism. I contend that Islamic female suicide bombers are using a very unconventional method (female terrorism) to achieve a very conventional (or traditional) goal – the maintenance or restoration of female honor as it is defined by their communities. Matriarchal conservatism does not relate to the Western conception of independent and socially equal women, but rather refers to the idea that Muslim women, in response to their culture, seek honor and status in a community that prizes righteousness, modesty, motherhood, and service to the Prophet Mohammad and the males in their lives.