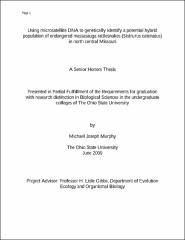 The college of Arts and Sciences undergraduate research fund