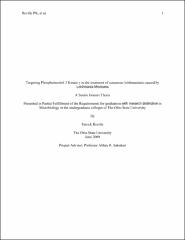 The Leishmaniasis are a group of tropical diseases which differ in their clinical, histological, and immunological features/characteristics. The Leishmaniasis are zoonotic diseases resulting from infection with protozoan parasites of the species Leishmania. Entry into host cells is essential for the survival and replication of obligate intracellular parasites, such as Leishmania mexicana, an obligate intracellular protozoan parasite that targets macrophages and neutrophils inside the mammalian host. Phosphoinositol 3-Kinases are a large family of lipid and protein kinases that are involved in mediating signaling in a variety of cellular responses such as proliferation, survival, differentiation, chemotaxis, degranulation, and respiratory burst. In this study we investigated the role of PI3Kg, the only member of Class IB PI3Ks, in mediating entry of L. mexicana parasites into macrophages and neutrophils. Expression of PI3Kg is limited primarily to cells of the hematopoeitic system and PI3Kg has been implicated in mediating actin polymerization and cytoskeletal rearrangement. We have found that blocking PI3Kg using an isoform- selective kinase inhibitor of the enzyme, AS-605240, reduces parasite entry into macrophages and neutrophils both in vitro and in vivo. Most importantly however, we show that daily treatment with AS-605240 is as effective as standard treatment with Pentostam sodium stibogluconate (SSG) at controlling parasite growth even when administered at a 10X lower dosage. These studies indicate a role for PI3Kg in the pathogenesis of cutaneous leishmaniasis and suggest that therapeutic targeting of PI3Kg using the isoform-specific kinase inhibitor AS-605240 is a viable strategy for treating Leishmaniasis and possibly other intracellular pathogens which target host phagocytes.