Join the revolution just for the health of it: A comparison of indigenous health in and outside of the Zapatista movement in Chiapas, Mexico 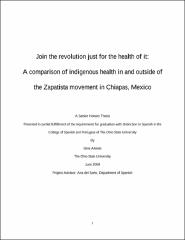 Through the years, the cultures of other countries have been judged by the international hegemonic culture, "Western culture." Justified under the titles of development and progress, modernity has been pushed in numerous countries known as members of the Third World. More recently, scholars promoted the concept of cultural relativism by which practices previously seen as backwards or underdeveloped could be viewed as valuable. However, one aspect that remains mostly untouched by cultural relativism is medicine. Not only is modernity deemed as better by outside audiences, but also by the culture itself. Any governmental attempts to save alternative practices such as shamanism are largely centered on Westerners looking for either the "ancient cure" or merely as entertainment. In indigenous populations in Chiapas, Mexico, curanderismo, a traditional form of healing, still exists due to lack of hospitals, clinics, or doctors in the diverse and often harsh terrain. In the early 90s, an indigenous insurgency called Ejército Zapatista de Liberación Nacional, radically altered the way the Mexican government and the rest of the world saw indigenous populations. One of their many demands was access to adequate health care, and from the newfound visibility of their great need, many European medical organizations have provided aid to the movement. Learning from the physicians, the Zapatistas now practice a form of medicine that integrates some of their traditions as well as Western medicine. This thesis will both describe the intricate balance between new and old ideas, as well as compare the existing data as to the traditional healing practices of indigenous populations outside of the Zapatista movement which have not been as affected as those within the movement.