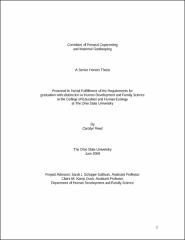 The familial roles of men and women are changing. As the percentage of mothers working outside the home has increased, so have expectations for men as fathers. Additionally, studies show many benefits for children of highly involved fathers. Still, research reveals that fathers are less involved with children than mothers, especially with infants. Many factors impact the level of father involvement, including the coparenting relationship (the amount of support and cooperation between parents) and mothers’ beliefs and behaviors. Researchers argue that mothers may act as “gatekeepers,” either hindering or facilitating fathers’ efforts to become involved. Although some research supports the existence of maternal gatekeeping and its effects on father involvement, little is known about the antecedents of gatekeeping behavior. The purpose of this study was to identify characteristics that predict prebirth maternal gatekeeping and coparenting. Data were collected from 56 first-time mothers during the third trimester of pregnancy as part of a larger research project. Participants completed questionnaires measuring: (1) level of education; (2) quality of parenting in the family of origin; (3) ambivalent sexism; and (4) beliefs about parental roles. Additionally, to assess coparenting and mothers’ prenatal gatekeeping, they and their partners participated in a videotaped interaction in which they pretended to “parent” their new baby (a lifelike doll) together. This task has been validated by research, which shows that couples’ interactions during this situation predict their real interactions after the birth. Mothers with a higher level of education, more adaptive coparenting in the family of origin, and less benevolent sexism were more likely to come from families with more warm and cooperative coparenting. No factor was able to predict maternal gatekeeping prebirth.