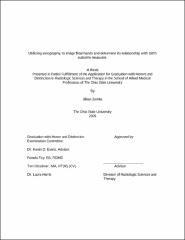 Diagnostic Medical Sonography has been used for many years to screen fetuses for anatomical and structural abnormalities. In 2004, twenty percent of fetal deaths in the United States occurred as a consequence of congenital malformations, deformations, and chromosomal abnormalities. With the use of sonography, many of these conditions can be detected well before birth. Sonographers look for certain markers, such as an increased nuchal fold at the back of the neck, absent nasal bones, clubbed feet, and hand deformations that may indicate chromosomal abnormalities. Abnormalities of the hands and fingers can be indicative of Trisomies 13 and 18, as well as Down’s syndrome, making imaging the hands extremely important. The research hypothesis was that a correlation exists between fetal hand positions, postures, and APGAR scores at birth. A secondary data analysis of 55 fetuses was designed to verify the proposed relationship between fetal hands and birth outcome measured by APGAR scores. Images were graded based upon whether the hands were open or closed and if they were positioned by the head, body, or legs. Results of the research disproved the research hypothesis as there was no significant correlation between hand posture and position and APGAR scores. Though it is important to use sonography to carefully scrutinize fetal hands for defects, determining posture and position may have limited utility for predicting fetal wellbeing prior to birth.