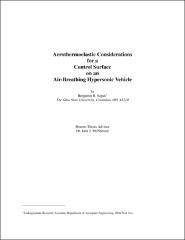 Air-breathing hypersonic vehicles have risen to the forefront of the aerospace research community in reaction to the requirements of NASA and the US Air Force. NASA has interest in developing a next generation Reusable Launch Vehicle and the US Air Force is interested in an unmanned hypersonic vehicle. Recent research has focused on developing comprehensive models in order to successfully design a vehicle capable of operating in the severe hypersonic environment. Due to the layout of this class of vehicle, where the propulsion system is fully integrated into the lifting body fuselage, a tight coupling exists between the airframe, propulsion system, control system, and aerodynamics. This characteristic necessitates a multi-disciplinary approach to modeling for control design. To achieve this, a simplified model of each subsystem is needed to efficiently perform a multi-disciplinary analysis. Two important and challenging areas for multi-disciplinary modeling are the incorporation of complex aerodynamic and aerothermoelastic phenomena. The focus of this research is on the development of a model for the control surface. Specifically an aerothermoelastic model, based on a plate representation, has been developed for the vehicle control surface. This model was adapted from a previous model, developed at the Air Force Research Laboratory, to incorporate important characteristics such as taper and sweep of the control surface. Thus, the model more realistically represents the geometry of a control surface for a hypersonic vehicle. The structural model developed was then verified using finite element analysis to compare the free vibration frequencies and modeshapes. Since the structural dynamic characteristics of a solid plate are not compatible to those of a shell structured wing, the structural properties were modified to match the first two frequencies of a representative wing, namely the F-104 Lockheed Starfighter wing. As the temperature of a plate increases, the first two frequencies begin to coalesce. This coalescence of frequencies leads to a phenomena known as flutter. As the temperature of the plate was increased the aerothermoelastic response was computed at a constant Mach number until the onset of flutter. By implementing a flexible control surface model, the response of the wing to control inputs and fuselage deformations could also be investigated. Both of these effects are modeled as base motion of the cantilevered plate. Second order piston theory, a commonly used model for hypersonic aerodynamics, was used to calculate the aerodynamic forces on the plate. Results presented provide insight into the importance of aerothermoelastic effects for control oriented modeling, as well as the effect of plate sweep and taper compared to a simple square plate representation.