Complex Interactions between Fish and Zooplankton: Quantifying the Role of an Open-Water Planktivore 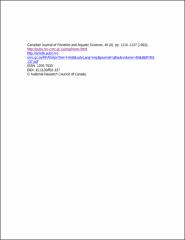 DeVries, Dennis R.; Stein, Roy A. "Complex Interactions between Fish and Zooplankton: Quantifying the Role of an Open-Water Planktivore," Canadian Journal of Fisheries and Aquatic Sciences, v. 49, no. 6, 1992, pp. 1216-1227.

An open-water planktivore, the gizzard shad (Dorosoma cepedianum), can drive complex interactions among fish and zooplankton in Ohio reservoirs. In Kokosing Lake, crustacean zooplankton density declined to near zero immediately after larval gizzard shad abundance peaked during 1987 and 1988. This decline can be attributed to increased death rates, due to predation, and to reduced number of eggs per cladoceran. In an enclosure/exclosure experiment, young-of-year gizzard shad at lake densities significantly reduced density sf crustacean zooplankton and rotifers within 2 wk. In addition, phytoplankton that were edible to zooplankton were reduced in enclosures, likely due to a combination of direct herbivory by gizzard shad and reduced nutrient availability due to uptake by the growing gizzard shad. Gizzard shad not only directly influenced zooplankton via predation, they also indirectly affected zooplankton by reducing phytoplankton abundance. Because larval bluegill (Lepomis macrochira) migrated to the limnetic zone during or shortly after the zooplankton decline, food available to these zooplanktivorous larvae, as well as their ultimate recruitment, was reduced with gizzard shad. Through direct (i.e. predation) and indirect (i.e. influencing algal abundance) pathways, gizzard shad can drive zooplankton to extinction, thereby reducing recruitment sf other fishes and controlling community composition.