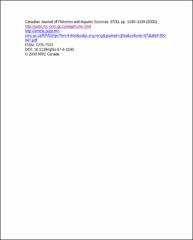 Density dependence in colonization is poorly understood. We studied colonization by a benthic, stream-dwelling caddisfly, Hydropsyche slossonae, through experiments varying conspecific densities and environmental conditions. A model of larval acceptance or rejection of a locality (dispersal from the locality) was developed and fitted to the data to estimate the relative strengths of density-dependent and density-independent processes underlying dispersal. In spring and fall, we varied density, substrate size, and current velocity in laboratory experiments and varied density in field experiments. In the laboratory, dispersal of fifth instars was always density dependent, but the strength of density dependence was highest in spring when the proportion dispersing was lowest. Dispersal in field experiments was density dependent only in spring. Proportion dispersing was highest under low flow. The model fit to laboratory data suggested that stronger density dependence in spring occurred because of a reduction in density-independent dispersal stimuli with no change in density-dependent stimuli. In contrast, a change in density-dependent stimuli did appear to cause differences between the proportions dispersing under the two flow regimes. The model reveals the potential for density-independent dispersal stimuli to modify the strength of density dependence detectable at the population level.

Abstract in English and French.