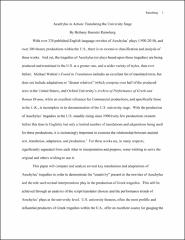 This paper will compare and analyse several key translations and adaptations of Aeschylus’ tragedies in order to demonstrate the "creativity" present in the rewrites of Aeschylus and the role such textual interpretations play in the production of Greek tragedies. This will be achieved through an analysis of the script/translator choices and the performance trends of Aeschylus' plays at the university level. U.S. university theatres, often the most prolific and influential producers of Greek tragedies within the U.S., offer an excellent source for gauging the U.S. relationship/interpretation of these ancient plays because they (1) continually produce these plays, (2) maintain detailed production records, and (3) combine academic, artistic, and commercial interpretations of the text. Do the production interpretations of Greek translations significantly differ from those of adaptations and how do these textual interpretations relate to their performance interpretations? Karelisa Hartigan’s seminal book, Greek Tragedy on the American Stage, states that the "scripts of Aeschylus, Sophocles, and Euripides have remained relatively unchanged…there have been, naturally, updated versions… Nevertheless, the old legend shows through" (Hartigan 3). Contrasting translation to adaptation, Hartigan asserts that it isn’t the texts that have radically altered, but the production interpretations. However, this paper will argue that there is a significant difference between translations and adaptations and that this difference directly effects the production of these plays, as seen at the university level.