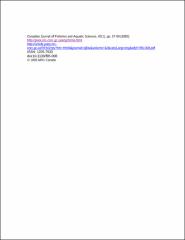 To predict stocking success of esocids in Ohio waters with different thermal regimes, we measured individual food consumption, conversion efficiency, growth, and metabolic rate for Ohio stocks of northern pike (Esox lucius), muskellunge (E. masquinongy), and their hybrid, tiger muskellunge, in laboratory experiments. The first three parameters were quantified during 2-wk experiments of ad libitum feeding on fathead minnows (Pimephales promelas) at seven constant temperatures (5, 15, 20, 22.5, 25, 27.5, and 30°C). The food consumption and growth data suggest that northern pike shouid grow faster than muskellunge at cool temperatures (<=20°C), but slower than muskellunge at warm temperatures, (>25C). Latitudinal differences in their natural distributions might explain this observation. Growth data of the hybrid showed no such obvious relationship to either of the parents. Metabolic rates were determined by measuring oxygen consumption in a closed, static respirometer at five constant temperatures (5,15,20,25, and 30°C). We found little difference in metabolic rates among the three taxa. To examine these data further, we used a bioenergetics model that simulated different stocking conditions, both natural (thermal regime and prey availabiiity) and human controlled (stocking size and date). With this model, we predicted growth for 12-15 mo after stocking. In general, summer-stocked fish were about 35-90% larger 15 mo after stocking than were fall-stocked fish 12 mo after stocking. More specifically, the combined effect of ration and temperature permitted hybrids to grow faster than the parents in all simulations. Northern pike grew larger than muskellunge in a cool system, but smaller than muskellunge in a warm system with summer stocking. Based on bioenergetic considerations, tiger muskellunge should outgrow both northern pike and muskellunge in thermal regimes common to Ohio waters.

This research was supported in part by funds from the Federal Aid in Fish Restoration Act under Bingell-Johnson Project F-57-R.