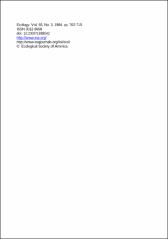 In the predator-prey interaction between redear sunfish (Lepomis mlcrolophus) and benthic, freshwater snails (Physa, Helisoma, and Oxytrema), we document selective predation among genera and sizes of prey and use optimal foraging theory in an attempt to explain diet selection. In experiments, sunfish strongly selected against Oxytrema and weakly discriminated between Physa and Helisoma, with Physa most often chosen; size selection within any genus did not occur. Among genera, selection results were consistent with differences in shell strength and a time cost/benefit (C/B) construct operationally defined as handling time divided by prey dry mass. Within any genus, neither shell strength (smallest snails had weakest shells) nor time C/B (largest snails had minimal C/B) provided predictions consistent with results from selective-predation experiments. To explain this discrepancy, we measured metabolic costs of handling and energy content of prey. Dividing net energy of prey (E, generated by subtracting the energetic cost of handling from prey energy content) by handling time (T) yielded values of E/T that were similar for Physa and Helisoma. Within either genus, E/T was always highest for largest snails. Thus, this construct also provided predictions inconsistent with our experimental results. Only an energetic CIB ratio, in which the energetic costs of handling were divided by the energetic value of the prey, was consistent with selection of Physa over Helisoma and no size selectivity within either genus. Whether predators add prey to their diet based on this construct is unknown at present. The lack of concurrence between theoretical predictions of how prey should be ranked by predators (i.e., according to energy gained per unit time expended) and our experimental results suggests these constructs should be re-evaluated. Unless we know the discriminatory ability of our predators (in terms of how fine a difference in prey types they can assess) and the currency used in making decisions, CIB or EIT constructs provide little insight into diet selection by predators.

This research was supported by the National Science Foundation, DEB 77- 16167.