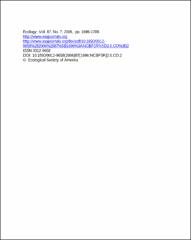 This research was funded by grants from the National Science Foundation (DEB- 9726877, DEB-9982124, and DEB-0235755) and the Ohio Department of Natural Resources-Division of Wildlife (FASR01 and FADR47), and by Miami University.