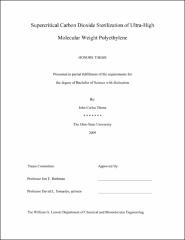 The aim of this research was to use a benign technique for the sterilization of ultra-high molecular weight polyethylene (UHMWPE), which is broadly used in artificial joints and other medical implants. Current sterilizations methods such as gamma irradiation, ethylene oxide gas, and gas plasma can damage the polymer, thus reducing its service life, as well as create harmful byproducts. Supercritical carbon dioxide (SC CO2) sterilization has the potential to greatly reduce both polymer degradation and negative environmental impacts. The former extends the life of the implant and the latter decreases waste disposal costs and minimizes risk to sterilization workers. The feasibility of using SC CO2 modified with additives such as ethanol, water and hydrogen peroxide was assessed for the sterilization of UHMWPE. The operating conditions and the amount of modifiers were optimized to achieve a complete inactivation of bacteria (spores included) and fungi. When equal volumes of all modifiers were added to CO2 at 37ºC and 170 bar so that their total mole fraction was ≥ 4.1E-03, complete inactivation of all microorganisms was achieved within 2 hours. The physio-chemical properties of the polymer were tested for untreated, as well as treated samples. An Instron measured the mechanical strength and elongation of the polymer, and Fourier Transform Infrared (FTIR) spectroscopy was used to measure the level of oxidation of the polymer to evaluate polymer chain damage. Both the physical and chemical properties of the polymer were unchanged after the SC CO2 sterilization technique. This research has shown that it is possible to sterilize medical grade polymer, under relatively safe conditions, without affecting its physio-chemical properties.