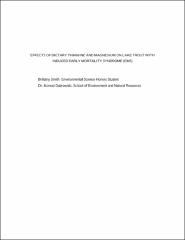 Multiple stressors contribute to Early Mortality Syndrome (EMS) in salmonid fisheries and its effects on the Great Lakes region, but the factors responsible for the variation of EMS are not clearly understood. EMS is as a characteristic embryonic mortality that affects the offspring of salmonines, and its impact on lake trout has significantly reduced natural recruitment. In this study, adult individuals were collected from Lake Michigan and their progeny were fed experimental diets containing different concentrations of thiamine and magnesium. A protocol was used to stain cartilage and bone separately for the histology portion. An image processing program was used to determine the percentage of bone and cartilage that was present in each head digitized. Color histograms were produced for each fish and determined the percentage of bone and cartilage proportions for each sample. The seventeen fish samples used were divided into two categories. The first category consisted of nine fish that were collected after the ninth week of the feeding experiment which were all fed commercial diet, and the second category was composed of all seventeen fish with commercial and experimental diets. For the first category, correlations were seen when comparing overall fish weight to percentage of bone and cartilage. This suggests that as the fish increased in size, they portrayed more advanced ossification and less cartilage was remaining. However, correlations between the differing diets and ossification were difficult to determine in the second category due to unevenly distributed samples.