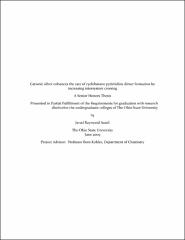 DNA can undergo mutations upon exposure to ultraviolet light; if left unrepaired, these mutations may lead to cancer. Irradiation studies have shown that the primary photoproduct formed between adjacent thymine bases is the cyclobutane pyrimidine dimer. In DNA base multimers, this photoreaction occurs within one picosecond of photoexcitation; if the photoexcited thymine bases are not within a specified geometric conformational threshold at the instant of photoexcitation, dimerization will not occur. However, in the presence of Ag+, the quantum yield of cyclobutane pyrimidine dimer formation increases. Emerging evidence concerning Ag+-DNA complexes suggests that the increased quantum yield is a result of either increased intersystem crossing to form a longer lived triplet state, or DNA aggregation that increases the frequency of two thymine bases being within the conformational threshold during photoexcitation. Ultraviolet C (UVC) steady-state irradiation experiments show that when the ratio of Ag+ to nucleic phosphate (referred to as r in this work) becomes greater than 0.25, the quantum yield of dimerization in (dT)18 increases with increasing Ag+ concentrations. In addition, the quantum yield increases for TMP in the presence of Ag+ (r=10), which suggests that increased intersystem crossing is responsible for this process, as TMP can only dimerize from the 3ππ* state. Finally, circular dichroism (CD) measurements of (dT)18 and various concentrations of Ag+ show that although for r=0, 0.05, 0.10, and 0.25, ∆ε at 275 nm does not change, ∆ε decreases for r = 0.5 and 1.0, indicating that the system is becoming increasingly unstacked, which discredits an aggregation explanation.