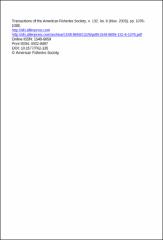 Steinhart, Geoffrey B.
Wurtsbaugh, Wayne A.

We sampled various limnological parameters and measured growth and diet of age-0 kokanee Oncorhynchus nerka (lacustrine sockeye salmon) during two winters in a high-mountain lake of the Sawtooth Valley, Idaho. Although winter has been recognized as an important period for many warmwater fishes and for stream-dwelling salmonids, winter limitations have only recently been studied for coolwater and coldwater species. Ice and snow cover in winter limited light penetration. As a result, chlorophyll-a and zooplankton density were lower in ice-covered periods than during ice-free periods. The weight of stomach contents was often below a maintenance ration, yet the incidence of empty stomachs was extremely low (1 of 63) and the weight of stomach contents increased as energy reserves declined, indicating that kokanee were actively foraging during winter. Kokanee length and weight remained constant during the winter of 1993–1994 but increased from November through May in 1994–1995. Condition factors, however, declined significantly over the winter in both years, and lipid content approached levels associated with mortality. Differences in growth patterns may have been caused by a combination of changes in zooplankton density and kokanee abundance and in kokanee behavior to defend energy reserves or avoid predation. Results demonstrated the ambiguity of some growth measurements and the importance of choosing the correct metric for measuring growth in fishes. Because juvenile kokanee and sockeye salmon are ecologically similar, management efforts to restore the endangered Snake River sockeye salmon to the Sawtooth Valley lakes should recognize that winter conditions might be a bottleneck for this species.

Funding for this project came from Utah State University, the Shoshonne-Bannock Indian Tribes (through Bonneville Power Administration project 91–71), and the Ohio State University.