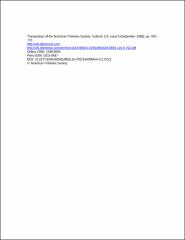 This research was supported in part by funds from the Federal Aid in Fish Restoration Project F-57-R. The Department of Zoology, The Ohio State University, and the Ohio Cooperative Fishery Research Unit also provided financial assistance, computer money, and equipment.