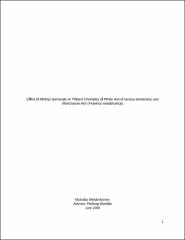 The Emerald Ash Borer (EAB; Agrilus planipennis) is an exotic invasive species that is killing native ash trees at an alarming rate. This pest has the ability to attack a healthy, native ash tree by bypassing the plant’s defenses. White ash (Fraxinus americana) is a native species that is of high economic and ecological importance in natural as well as urban environments, but is susceptible to EAB. Manchurian ash (Fraxinus mandshurica Rupr.) is native to northeastern Asia and is resistant to attack from EAB. Methyl jasmonate (MeJA) is known to accumulate in angiosperms in response to herbivory and to upregulate host defense responses. We are testing if methyl jasmonate can prime a tree’s defenses by inducing accumulation of phloem phenolics, a class of compounds that has been implicated in plant resistance to both pathogens and insects. Half the trees of each species were treated by painting a solution of MeJA on three randomly selected branches to runoff and a water control was applied to the other trees. Sub-treatments of EAB larval homogenate (a surrogate for EAB attack), wound, and non-wound, were applied to one of the three randomly selected braches on all trees. Phenolics were extracted in methanol and the extracts were analyzed by high-performance liquid chromatography. Preliminary results show that fourteen compounds of interest were affected by treatment and that Manchurian ash responded more strongly to MeJA and produced more defense compounds than white ash. These results are discussed in relation to Manchurian ash resistance to EAB.