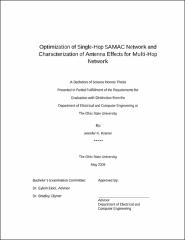 Wireless sensor networks are becoming more prevalent in today’s world and being used for such tasks as monitoring borders, intrusion detection and even to control different switches/controls in vehicles. With any wireless system, several issues exist, which can affect the performance of the network such as power level, receiver thresholds, environment the nodes are in and objects/obstructions near the network. The main problems with wireless sensor networks are dropped packets, noise, power consumption and lack of reliability. The goal of the project is to study networks in different environments and look at how the network performance changes. The first goal is to optimize the network for low power consumption, and minimal data transmit time. To achieve these optimal conditions, the timeslot duration, power level, and inter-arrival time are modified in several combinations. The tests are run on a single-hop, contention-based wireless network with one to eight nodes competing for transmission depending on the given test. The nodes are separated at a distance of five feet from the sink node. The antennas on the wireless sensor network nodes are stated as being almost omni-directional [5]. Since the power pattern of the antenna will affect quality of network communications if not perfect, the orientation of the nodes is examined to see how a change in orientation affects how the network is created in a multi-hop setting. The second goal is to analyze the effects of three different node orientations on how the network is formed. The SAMAC code is run for each orientation and the network topology is recorded. This topology will be examined to see if a difference exists in how the nodes communicate when oriented differently. Lastly, using the results from testing, guidelines for optimization of the networks will be created. Recommendations will be given on how to set up both the single-hop and multi-hop networks for ideal communications. Future research topics related to current research will also be suggested.