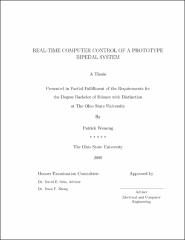 While much work in the area of robotics has attempted to replicate the power and agility of biological locomotion in a physical system, even the most impressive prototypes to date are functionally very simple in comparison to their biological counterparts. Biological systems particularly excel in their performance of dynamic maneuvers, such as a run or a jump. These maneuvers require explosive leg power coupled with sudden changes in trajectory. In mechanical systems, these requirements create the need for high-performance actuation and fast real-time control. Through a fusion of biologically inspired design and intelligent control strategies, current work aims to perform these types of maneuvers on a prototype biped robot named KURMET. As part of this research thrust, the goal of this work was to establish real-time control for the bipedal system. A distributed control system, that uses a cutting edge motion controller in conjunction with a Linux host computer, was developed to control these maneuvers. The resulting system provides on-board real-time control capable of 1~kHz servo rates over the biped's four actuators. A distributed control framework was developed to interface this foundational control system with the Linux host. This framework was then applied to produce state-based control strategies which have demonstrated a walk and a high-performance jump in hardware. While applied to these two complex movements, the control framework's modular design facilitates extension to a wide range of motions. Thus, this work has laid the foundation for a rich set of investigations into dynamic maneuvers for this platform.

Grant No. IIS-0535098 from the National Science Foundation