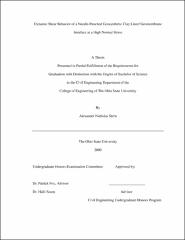 Geosynthetics are used in waste containment applications in landfills across the world, including seismic regions. The investigation of the interface shear strength of a geomembrane (GM) and a geosynthetic clay liner (GCL) under cyclic motion is needed in order to better understand its response to dynamic loading (e.g. earthquakes). The following thesis discusses the research program of testing the response of the interface of a textured GM (GMX) and a GCL. A large dynamic direct shear machine developed by Fox et al. (2006) has been used for the testing process. This machine allows larger specimens and larger normal stresses than for common direct shear devices. Commonly used geosynthetic materials were carefully chosen from some of the most well-known manufacturers. The GCL was Bentomat DN provided by CETCO (Hoffman Estates, IL). The GMX was a HDPE Microspike/Smooth product produced by Agru America (Georgetown, SC). The first stage of the testing procedure considered the monotonic (single-direction) shear strength of the GMX/GCL interface. The displacement rates, R, used in this procedure were 1, 100, 10000, and 25000 mm/min. A GCL internal shear strength test was also run at R = 0.1 mm/min in order to find the shear stress necessary to cause internal failure. The results indicate that displacement rate does not have a large effect on the peak shear strength. All tests reached their peak stress approximately the same displacement. Each test was carried out to a displacement of 200 mm. The second stage of the testing program considered the cyclic loading response of the GMX/GCL interface. Displacement amplitudes Δa = ±2, 10, 15, 20, 30, 60, and 120 mm, were applied to seven specimens. These cyclic tests used a sinusoidal wave form with a frequency of 1Hz and a total of 25 cycles. The displacement amplitudes included both pre-peak (Δa = ±2 and 10 mm) and post-peak (Δa = ±15, 20, 30, 60, and 120 mm) displacements. The cyclic behavior was analyzed. The last stage of the research program examined the post-cyclic static shear response of the GMX/GCL interface. Each post-cyclic static test was carried out at a displacement rate of R = 1 mm/min. For Δa < 15 mm, the peak shear stress was not affected, and corresponded to the peak shear stress of the monotonic test completed with no previous cyclic testing. For Δa ≥ 15 mm, the peak strength was greatly reduced. For displacements greater than Δa = 20 mm, small peak strength reductions continued until Δa = 120 mm. The large-displacement shear strength of the tests that underwent cyclic testing was slightly less than that of the test that did not undergo cyclic testing.