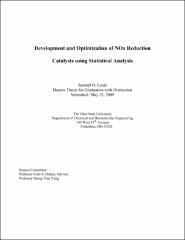 Increasing regulation and a push towards fuel-efficient automobile engines has driven the development of new NOx emission removal technology for natural gas reciprocating engines and diesel engines. While many technologies have been developed, one of the more promising advances has been the patented dual catalyst approach, which both oxidizes and reduces NOx in the presence of a reducing agent. The system operates by first oxidizing nitrogen monoxide to nitrogen dioxide over a cobalt-based catalyst, and then reducing the nitrogen dioxide to nitrogen over a reducing palladium-based catalyst under the presence of methane (reducing agent). The process is based on findings that it is thermodynamically easier to reduce nitrogen dioxide than nitrogen monoxide and the dual catalyst has shown experimentally to obtain nitrogen yields of close to 90% when operating under simulated exhaust conditions. While the approach has been effective in reducing NOx under dry conditions, the reduction catalyst has shown to deactivate in the presence of water vapor, a common component in engines. This report focuses on the development of new, water-resistant, reduction catalyst formulations that are active for NOx reduction with the emphasis on activity. Two pathways were chosen for the synthesis of new catalysts. The first pathway focused on modifying the preparation technique from incipient wetness impregnation to sol-gel technique, which changed the preparation from a physical route to a chemical route. Several levels of alkoxide concentration and nominal sulfuric acid loading were studied to see how these sol-gel parameters impacted surface area, pore volume, and activity. ANOVA and regression modeling were used as a method to determine parameter significance and for optimization work. Results indicated that the nominal sulfate loading heavily impacted the surface area and pore volume with a maximum occurring in the system that may be linked to monolayer surface coverage of sulfate. The alkoxide concentration was less important but the analysis indicated the presence of an interaction effect between the sulfate and alkoxide concentration. XPS data taken on these indicates that samples prepared with an alkoxide concentration/sulfuric acid ratio (sulfate ratio) of 2 retained the most sulfur after calcination, which was in disagreement with the best-obtained surface area and pore volume. Activity testing ran the new reduction catalysts across a nitrogen dioxide, oxygen, and methane stream to test for nitrogen yield. Results showed that temperature was the primary effect in NOx selective catalytic reduction with alkoxide concentration and sulfate ratio following. Significant interactions were present with a change in one factor affecting others. The sample with a sulfate ratio of 2 and an alkoxide concentration of 1 molar had the best yield though ANOVA showed this point to be a statistical outlier, which added emphasis to the XPS data of maximum sulfur retention. In general, the model showed that increases in alkoxide concentration and increases in the nominal sulfate loading increased NOx reduction activity, though the interactions complicated this system. The second pathway focused on changing the catalytic support from zirconia to ceria on incipient wetness prepared Pd-based catalysts. Ceria has been shown to be more hydrophobic that zirconia and has been active in other catalyzed reactions. Several catalysts were prepared that varied the palladium loading and sulfate loading on the samples to see how these parameters impacted nitrogen dioxide reduction. Results indicated that all samples failed to show activity and further work is being accomplished to change the formulation.