Artificial negative permeability based on a fractal Jerusalem cross 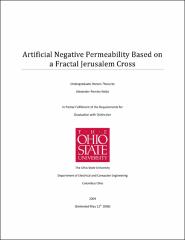 In recent years new fabrication methods have led to electromagnetic structures not previously possible to create at sub-wavelength sizes, opening up an entirely new field of engineering: metamaterials. These sub-wavelength structures can lead to new properties not found in nature, such as a negative index of refraction, which has been demonstrated to yield a working cloaking device. This field presents a new degree of freedom to designers but there are several issues preventing the ease of design found in more established fields. One of the problems with creating metamaterial structures is presented in the analysis of such structures. With structures of sub-wavelength size analysis has been shown to be valid if the metamaterial is considered a homogeneous material, but traditional analysis methods are unable to treat these structures as such. Thus, new analysis methods have been devised. A robust method of effective material parameter retrieval is implemented in this research with several well-known structures to demonstrate its effectiveness. The well-known structures of metamaterial research, such as split-ring resonators (SRR) and complementary electric L-C (CELC) resonators, have well-documented issues such as narrowband resonant responses, high losses, and polarization sensitivity. Metamaterial designers typically deal with a structure which simulates an artificial magnetic material, as with the aforementioned SRR and CELC structures. The novelty of this field has led many, if not most, researchers to deal either entirely with SRRs or structures very similar to them. The robust analysis method implemented in this research was used to design and characterize new metamaterial unit particles with improvements over the traditional SRRs and CELCs. Following initial design the new particles were simulated using Ansoft’s industry-standard electromagnetic simulation tool, HFSS. These simulations yielded scattering parameters for the new structures, permitting the robust analysis method to extract effective material parameters. The unit particles were designed with the goals of increasing polarization independence and making multi-band structures, enabling flexibility for designers not available with existing metamaterial unit particles. Particles based on a fractal Jerusalem Cross provided the multi-band capability not found in existing structures and increased rotational independence of the structure.