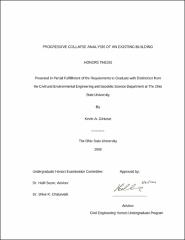 This research study investigates an actual structure’s potential to fail due to progressive collapse. Progressive collapse in a structure occurs when major structural load carrying members are removed suddenly, and the remaining structural elements cannot support the weight of the building and fail. This failure usually occurs in a domino effect and leads to a progressive collapse failure in the structure. The bombing of the Murray Federal Building in Oklahoma City is a typical example of progressive collapse failure. The initial bomb blast caused only 10% of the structure’s damage, and the resulting progressive collapse failure lead to 90% of the structure’s damage. This experiment involved testing of a steel building scheduled for demolition in Northbrook, Illinois. The demolition team tore out four selected columns from the building to simulate the sudden column removal that leads to progressive collapse. The structure was instrumented with strain gauges that recorded the change in strain in various structural members while the columns were removed. The author instrumented the beams and columns in the building, managed the testing, and analyzed the recorded data. The strain values recorded in the field were compared with the results from a computer model of the building. The model was created in a structural analysis program (SAP2000). The research is still underway, and the strain values recorded in the field and the computer model are being compared and analyzed. The percent error between the calculated and measured strains in a selected column was 21%. The SAP2000 analysis conducted in this research was based on linear material properties. The numerical models and simulations will be expanded to include nonlinear effects and dynamic analysis. The ultimate goal of this ongoing progressive collapse research on real buildings is to develop better building evaluation and design guidelines for structural engineers to use to prevent progressive collapse in new and existing buildings. Future progressive collapse research recommendations are also presented. The instrumentation of strain gauges for optimum results is discussed, and column removal guidelines and linear displacement sensor instrumentation are also shown.