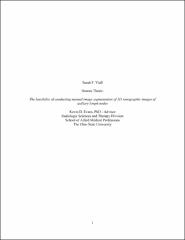 The current standards of axillary lymph node staging following cancer diagnosis involve significant ionization, morbidity, and cost. While sonography has not yet been used in this capacity, three dimensional ultrasound has been used in the modeling of breast tumors with some success. This study was interested in determining whether 3D ultrasound could be used to manually segment axillary lymph node images in order to determine a reliable volume for later possible clinical significance. Fourteen volunteers were collected and one to three of their axillary lymph nodes imaged using a 4D16L GE transducer, specially designed to make volume measurements. Each node was then manually segmented using a deformable snake by two licensed sonographers and one untrained student and their volume results compared. Between the licensed sonographers for nodes 1, 2, and 3 correlations of r = 0.9 were achieved. Between the student and Sonographer A correlations of r = 0.6, 0.9, and 0.9, respectively, were accomplished, while with Sonographer B the correlations were r = 0.5, 0.9, and 0.9. This demonstrated the feasibility and validity of this technology, as well as indicated the importance of increased operator training. Three dimensional ultrasound should not be ruled out as a non-ionizing, less invasive alternative in lymph node staging. Advisor: Dr. Kevin Evans