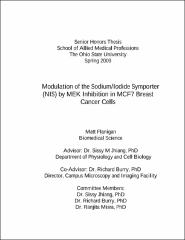 The Na+/I- symporter (NIS) mediates radioiodine therapy in thyroid cancer patients. NIS is also present in many human breast tumors, suggesting that radioiodine may also be used for detection and ablation of breast cancer. Inhibition of MEK (MAPK/ERK Kinase) signaling has been shown to have anti-tumor activity in breast cancer models. Previous data from our lab shows that MEK inhibition reduces NIS protein level and function via lysosomal degradation in trans-Retinoic Acid/Hydrocortisone treated MCF7 human breast cancer cells. We investigated the effect of MEK inhibition on constitutively expressed NIS in MCF7 Cells Western blot analysis demonstrates that MEK inhibition also reduces exogenous NIS stably expressed in MCF7 cells, suggesting that NIS downregulation by MEK inhibition occurs at the post-transcriptional level. The extent of reduction in NIS activity as determined by radioiodine uptake assay correlates with the reduction of cell surface NIS levels as analyzed by flow cytometry. Fluorescence activated cell sorting was performed to isolate a population of MCF7 cells stably expressing high levels of cell surface NIS. To investigate whether the reduction of surface NIS is due to increased endocytosis, live cell labeling of cell surface NIS was successfully performed and internalization was visualized over time. While NIS remains at the cell surface after labeling with primary antibody alone, NIS endocytosis is induced by conjugated primary and secondary antibodies, presumably due to clustering. An immunofluorescence based internalization assay was performed to determine if the degradation of NIS by MEK inhibition is via increased internalization or by degradation prior to cell surface trafficking. However, no detectable difference in NIS levels between treated and non-treated cells was detected. Western blot analysis to determine the temporal profile of NIS degradation by MEK inhibition revealed that MEK inhibition does not lead to NIS degradation in the population of selected MCF7 cells with high surface NIS expression. Investigation of how NIS degradation is avoided in this population may help to develop strategies to prevent NIS reduction by MEK inhibition such that MEK inhibition and radioiodine therapy could be used concurrently for breast cancer treatment.