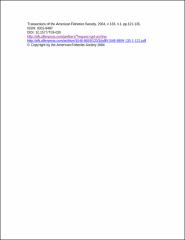 Steinhart, Geoffrey B.
Marschall, Elizabeth A.
Stein, Roy A.

Steinhart, Geoffrey B.; Marschall, Elizabeth A.; Stein, Roy A. "Round Goby Predation on Smallmouth Bass Offspring in Nests during Simulated Catch-and-Release Angling," Transactions of the American Fisheries Society, v. 133, no. 1, 2004, pp. 121-131.

This research was funded by Federal Aid in Sport Fish Restoration Project F-69-P, administered jointly by the U.S. Fish and Wildlife Service and the Ohio Department of Natural Resources, Division of Wildlife, and the Department of Evolution, Ecology, and Organismal Biology at Ohio State University.