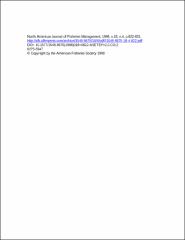 We used a spatially explicit simulation model to examine the effects of lake shoreline length and lakewide fish density on electrofishing catch-per-unit-effort (CPUE) estimates of fish density. We also tested model predictions regarding the influence of shoreline length and fish density on precision of CPUE estimates by analyzing electrofishing data from Ohio reservoirs for juvenile gizzard shad Dorosoma cepedianum, which is a schooling fish, and largemouth bass Micropterus salmoides, a more solitary fish. Our goals were to estimate the impact of these factors on variability associated with population estimates derived from CPUE and to determine how these factors influence the minimum number of transects required to sample populations with a reliable degree of precision. Neither ‘‘minimum transect number’’ (number of transects sampled per lake in which all of 10 replicate simulations provided density estimates within 610% of the mean) nor ‘‘minimum variance’’ (variance among estimates given 20 transects/estimate) were affected by the size of lake being sampled. However, minimum transect number decreased with lakewide fish density, and minimum variance increased with fish density, particularly when fish were patchily distributed. Our results show that it is reasonable to choose one effort level (i.e., a constant number of transects per lake) for a variety of systems. This constant level of effort can achieve acceptable precision in systems differing in lake shoreline length, fish density, and fish patchiness, except in those systems having extremely low overall fish densities. In this case, more transects may be required.

Support for this project was provided by Federal Aid in Sport Fish Restoration, project F-69-P, administered jointly by the U.S. Fish and Wildlife Service and the Ohio Division of Wildlife, and by the Department of Zoology, Ohio State University.