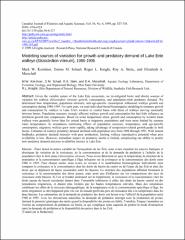 Support for this project was provided by a University Fellowship from the Graduate School of the Ohio State University (to M.W.K.) and by Federal Aid in Sportfish Restoration F-69-P, administered jointly by the U.S. Fish and Wildlife Service and the Ohio Division of Wildlife, and by the Department of Zoology, Ohio State University.