In search of the optimal management strategy for Arabian oryx 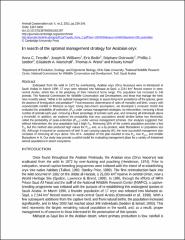 Extirpated from the wild in 1972 by overhunting, Arabian oryx (Oryx leucoryx) were re-introduced in Saudi Arabia in March 1990; 17 oryx were released into Mahazat as-Sayd, a 2244 km2 fenced reserve in westcentral Arabia, which lies at the periphery of their historical home range. The population has increased to 346 animals. The National Commission for Wildlife Conservation and Development, and those that manage the herd, have recently asked, ‘What is the optimal management strategy to assure long-term persistence of the species, given the absence of immigration and predation?’ Food resources, determinants of rates of mortality and birth, covary with unpredictable rainfall in Mahazat as-Sayd. Using data-driven assumptions, we developed a computer model that evaluated the probability of extinction (Pex) under various management strategies: no intervention, removing a fixed number of animals each year, removing a fixed percentage of animals each year, and removing all individuals above a threshold. In addition, we explored the probability that oryx populations would decline below two thresholds, called the probability of quasi-extinction (Pq-ex) under various management schemes. Our analyses suggested that, without intervention, the oryx population had a high Pex. Removing 15% of the current population provided a low Pex, but this method also produced high values for Pq-ex and, as a by-product, wide fluctuations in population size (N). Although it required an assessment of both N and carrying capacity (K), the most successful management plan consisted of removing all oryx above 70% of K. Adoption of this plan resulted in low Pex, low Pq-ex, and smaller fluctuations in N. Our study may provide a useful model for evaluating management plans for a variety of threatened animal populations in desert ecosystems.

Funding for this project was received from the National Wildlife Research Center, Taif, Saudi Arabia, and from the Columbus Zoo, Columbus, OH.