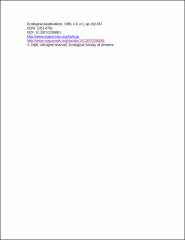 Marschall, Elizabeth A.
Crowder, Larry B.

Population declines are often caused by multiple factors, including anthropogenic ones that can be mitigated or reversed to enhance population recovery. We used a size-classified matrix population model to examine multiple anthropogenic effects on a population and determine which factors are most (or least) important to population dynamics. We modeled brook trout (Salvelinus fontinalis) in southern Appalachian mountain streams responding to multiple anthropogenic effects including the introduction of an exotic salmonid species (rainbow trout, Oncorhynchus mykiss), a decrease in pH (through acidic deposition), an increase in siltation (from roadbuilding and logging), and an increase in fishing pressure. Potential brook trout responses to rainbow trout include a decrease in survival rate of small fish, a change in density dependence in survival of small fish, and a decrease in growth rates of all sizes. When we included these responses in the population model, we found that population size tended to decrease with an increase in small-fish growth rate (producing a population with fewer, but larger, fish). In addition, changes in patterns of density-dependent survival also had a strong impact on both population size and size structure. Brook trout respond to decreases in pH with decreased growth rate in all size classes, decreased survival rates of small fish, and decreased egg-to-larva survival rates. This combination of effects, at magnitudes documented in laboratory experiments, had severe negative impacts on the modeled population. If siltation effects were severe, the extreme increase in egg-to-larva mortality could have strong negative effects on the population. However, even very strong increases in large fish mortality associated with sport harvesting were not likely to cause a local extinction. In all of these cases, the interaction of drastic changes in population size structure with randomly occurring floods or droughts may lead to even stronger negative impacts than those predicted from the deterministic model. Because these fish can reproduce at a small size, negative impacts on survival of the largest fish were not detrimental to the persistence of the population. Because survival of small juveniles is density dependent, even moderate decreases in survival in this stage had little effect on the ultimate population size. In general, a brook trout population will respond most negatively to factors that decrease survival of large juveniles and small adults, and growth rates of small juveniles.