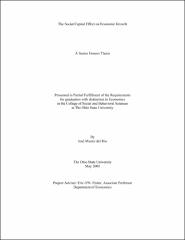 This study proposes a new measure of social capital, voter turnout, and attempts to confirm the results of previous studies (e.g. Knack and Keefer [1997] or La Porta et al. [1997]). Compared to previous measures of social capital used in the literature, our measure is available over several decades and thus should capture efficiently long-term trends in social capital. Furthermore, our measure should be immune to cultural biases in reporting and responding as compared to measures of trust and civic engagement. Finally, voter turnout measures a behavior rather than a belief. Our empirical results suggest that there is no direct link between social capital and long-run economic growth, contradicting previous results. However, our results do suggest that social capital can improve government efficiency. We suggest that stronger institutions, which help the securing of economic outcomes, are the economic pay-off of social capital. Furthermore, we also suggest social capital as an observable determinant of what Hall and Jones (1999) call "social infrastructure." Thus our results provide empirical evidence for the mechanism through which institutions are determined.

Except where otherwise noted, this item's license is described as Attribution 2.0 Generic