Characteristics of Muskellunge Spermatozoa I: Ultrastructure of Spermatozoa and Biochemical Composition of Semen 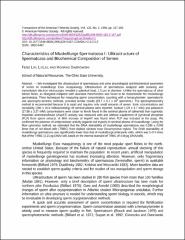 We investigated the ultrastructure of spermatozoa and some physiological and biochemical parameters of semen in muskellunge Esox musquinongy. Ultrastructure of spermatozoa analyzed with scanning and transmission electron microscopes revealed a spherical head, 1.5 μm in diameter. Unlike the spermatozoa of other teleost fishes, an elongated midpiece with abundant mitochondria was found to be characteristic for muskellunge spermatozoa. Three techniques for measuring sperm concentration, counting with a hemacytometer, spermatocrit, and spectropho-tometric methods, provided similar results (19.7 ± 6.1 x 10^9 sperm/mL). The spectrophotometry method is recommended because it is rapid and requires only small amounts of semen. Ionic concentrations and osmolality (289 ± 16.8 milliosmols/kg) of seminal plasma were reported. Sodium (129 ± 6.7 mM) and potassium (27.88 ± 3.27 mM) concentrations were closer to levels found in the seminal plasma of salmonids than cyprinids. Aspartate aminotransferase (AspAT) activity was measured with and without supplement of pyridoxal phosphate (PLP) from sperm extracts. A 96% increase of AspAT was found when PLP was included in the assay. We confirmed the presence of antiprotcinasc activity (against cod trypsin) in seminal plasma of muskellunge. Using the flow cytometry method, we estimated that the DNA stainability of muskellunge spermatozoa was 0.188 ± 0.008 limes that of red blood cells (TRBC) from diploid rainbow trout Oncorhynchus mykiss. The DNA stainability of muskellunge spermatozoa was significantly lower than that of muskellunge embryonic cells, which was 0.474 times that of the TRBC (2.21 pg DNA/ cell, based on the internal standard of TRBC of 4.66 pg DNA/cell).

This work was funded by the Federal Aid in Sport Fish Restoration Program (project F-69-P, Fish Management in Ohio) administered jointly by the United States Fish and Wildlife Service and the Ohio Division of Wildlife. Salaries were partly provided by the state and federal funds appropriated to the Ohio Agriculture Research and Development Center (OARDC). This is OARDC manuscript 47/95.