Uptake and depletion of plasma 17α-methyltestosterone during induction of masculinization in muskellunge, Esox masquinongy: Effect on plasma steroids and sex reversal 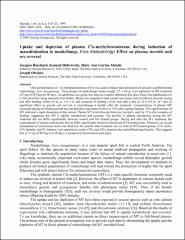 Oral administration of 17α-methyltestosterone (MT) was used to induce masculinization of sexually undifferentiated muskellunge, Esox masquinongy. Three groups of muskellunge (mean weight, 2.5 ± 0.6 g) were submitted to MT treatment (15 mg of MT/kg) for 60 days. An additional one group was used as a control (hormone-free diet). Food was distributed over a 10-h period by using automatic belt feeders. Blood was sampled in both control and treated fish at different intervals during and after feeding: before (0 h), at 3 h, 6 h, and cessation of feeding (10 h), and after a fast of 22 h (32 h). MT had no significant effect on growth and survival in muskellunge 6 months after the treatment. Concentrations of plasma MT increased during the feeding period and reached their maximum levels 6 or 10 h after starting feeding. This rapid increase of MT indicated a rapid absorption of this steroid. Plasma MT levels then declined and reached a radir by 22 h after cessation of feeding, suggesting that MT is rapidly metabolized and excreted. The profiles of plasma testosterone during the MT treatment did not differ significantly between control and MT-treated groups. During and after the MT treatment, the concentration of plasma testosterone did not differ significantly between control and MT-treated groups. Moreover, no sexual dimorphism of testosterone levels was observed. Six months after treatment, the sex ratio in MT-treated groups (33% males, 62% females, and 5% intersex) was opposite to control (70% and 30%, respectively) and differed significantly. This suggests that at 15 mg of MT/kg over 60 days, a paradoxical feminization took place.