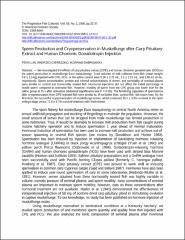 We investigated the effects of carp pituitary extract (CPE) and human chorionic gonadotropin (hCG) on the sperm production in muskellunge Esox masquinongy. Total volumes of milt collected from fish (mean weight, 4.8 ± 1.5 kg) injected with CPE, hCG, or the saline control were 5.36 ± 3.75 mL, 3.1 ± 1.52 mL, and 3.89 ±2.16 mL, respectively. Sperm concentration, protein and mineral concentrations of semen, and osmolality of seminal plasma were similar in control and hormonally treated fish. Hormonal injections did not affect the initial percentage of motile sperm compared to untreated fish. However, motility of sperm from the CPE group was lower than for the saline group at 75 s after activation (statistical significance was P = 0.06). The fertilizing capacities of spermatozoa after cryopreservation from CPE-injected fish were similar to, if not better than, control fish. We report here, for the first time, the successful cryopreservation of muskellunge semen, which produced 30.1 ± 3.8% survival to the eyed-embryo stage versus 72.9 ± 8.7% survival obtained with fresh semen.

This work was funded by Federal Aid in Sport Fish Restoration project F-69-P (Fish Management in Ohio), which is administered jointly by the U.S. Fish and Wildlife Service and the Ohio Division of Wildlife. Salaries were partly provided by state and federal funds appropriated to the Ohio Agriculture and Development Center. This is manuscript 173/95.