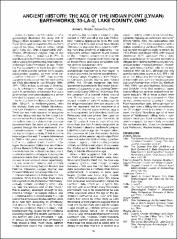 A previously reported radiocarbon date from the Lyman or Indian Point Site, a hilltop fort along Paine Creek, Lake Co., Ohio, supports the contention (Murphy 1968) that some of the northern Ohio hilltop forts described by Charles Whittlesey (1851) are Early Woodland in age, despite the frequent attribution of them to the Late Woodland or Late Prehistoric period (e.g., Lepper 2004).