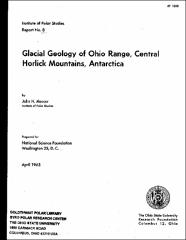 Local glaciers in the Ohio Range of the Central Horlick Mountains have associated ice-cored moraines indicating ice shrinkage, but there is considerable difference in the regime from one glacier to another. The older ice-core moraines are at least 6000 years B.P. in age. The relative rates of weathering and gravitational transfer of sandstone and diabase boulders suggests that one surface has been free of ice for about 720,000 years. The complete absence of organic matter for absolute dating makes accurate correlation with other areas impossible. Striae, perched boulders, and stranded moraines show that the main Polar Plateau ice surrounding the Ohio Range has been at least 60 m thicker than it is now. This amount is in agreement with the assumed changes of the continental ice sheet caused by its adjustment to a lower sea level whereby there is a large increase in ice thickness at the coast and a smaller increase inland.

Report submitted by Richard P. Goldthwait to the National Science Foundation.
The University Archives has determined that this item is of continuing value to OSU's history.