Chemical Compositions of Selected Minerals within Harzburgite from the Leucite Hills, Wyoming. 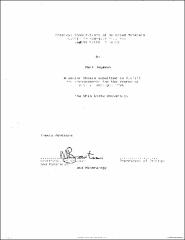