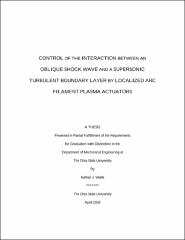 The ability of localized arc filament plasma actuators to eliminate or reduce the extent of boundary layer separation in the interaction between an oblique shock wave and a turbulent boundary layer is examined. This is an important phenomenon occurring in many applications including supersonic aircraft engine inlets. The effects of the actuators on the flow were studied for varying frequency, location, and mode of actuation of the actuators. The effectiveness of the forcing was determined by using schlieren imaging techniques, particle image velocimetry, and unsteady pressure measurements. The data collected shows that the actuators do have significant effects on the flow and can effectively remove the separation caused by the shock wave/boundary layer interaction.