Variation in Plumage Coloration of Northern Cardinals in Urbanizing Landscapes 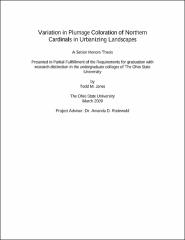 Despite decades of study, biologists know relatively little of how one of the most important avian phenotypic signals, feather coloration, may be affected by anthropogenic disturbances resulting from urbanization. From 2006-2008, I examined the relationship between urbanization and the carotenoid-based plumage color in Northern Cardinal (Cardinalis cardinalis) breeding in 13 riparian forests distributed across a rural-to-urban landscape gradient in central Ohio, USA. Color analysis from feathers collected each year from territorial breeding individuals (131 males and 149 females) indicated that plumage had more red hues with improving body condition for males and weakly for females. However, the amount of urbanization surrounding the forests in which cardinals bred was not related to coloration of either males or females. This study provides evidence that male plumage coloration of Northern Cardinals may serve as an effective indicator of individual condition. Also, the lack of a relationship between plumage coloration and urbanization suggests that urbanizing landscapes do not influence the ability of cardinals to sequester carotenoid-rich sources of food.