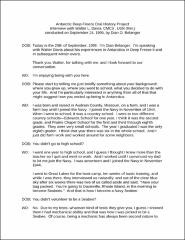 Seabee Walt Davis volunteered for Antarctic duty in Deep Freeze II for the challenge of fully using his talents. Responsible for equipment maintenance, he was the only professional mechanic at Ellsworth Station. Wintering over in 1957, he assisted the IGY scientists with their equipment problems despite the station leader's objections (though not as much as he later wished). He discussed the ongoing tensions at the station. In DF 61, he wintered over at Byrd, where, as the leading chief, he essentially ran the station, and was the leading chief on the first American overland expedition to the South Pole. He wintered again as the leading chief for motor pool maintenance and public works operations at McMurdo in DF 66.