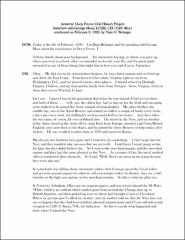 Surveyor chief and navigator George Moss always claimed that he "was volunteered" for Antarctic duty in Deep Freeze I because of his Arctic experience and cold-weather survival training. He was the operations chief for Little America, the senior enlisted man, and an acknowledged, admired leader beyond official duty. A member of the trail party to find a route to inland Byrd Station, he distrusted the approach of the leader, a "hero" of the old school. On the return by Otter with six others of the party, the plane crashed in bad weather. Moss determined that they were far off-course and knew there were no operable airplanes in camp to search for them, so he insisted, contrary to conventional wisdom, that they walk back via Okuma Bay where seals could provide food. All survived. The following spring, he was a member of the first Byrd tractor train and helped survey and build that camp.