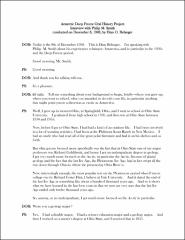 Lieut. Philip Smith was a crevasse expert in an Army transportation unit in Greenland when Admiral Dufek asked him to blaze a safe trail to Marie Byrd Land. He agreed immediately. After recon-noitering a route by air, the crevasse team blasted and filled seven miles of deadly fissures where the ice sheet met the ice shelf. Smith then guided the first tractor-train through. On his return ship, he was recruited to work for the IGY with the National Academy of Sciences in Washington. The would-be geologist returned to do ice deformation measurements on the Ross Ice Shelf in Deep Freeze III and the following summer to coordinate IGY programs from McMurdo. Joining the US Antarctic Research Program at the National Science Foundation, he planned summer field research supported by LC-130, promoted cooperative international scientific projects, drafted policies on tourism, and helped work out the transfer of financing Navy support to NSF, which then purchased the Navy's services. After science policy work in other agencies, in 1981 he became executive director of the National Research Council, whose Polar Research Board he had earlier helped found to advise NSF on long-range planning.