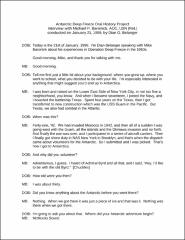 Aviation ordnance chief Mike Baronick was a crew member on the first R5D that flew to the polar continent from New Zealand in December 1955. He wintered over at McMurdo during Deep Freeze I as the senior aviation enlisted man. The line chief for the aviation unit VX-6, he was responsible for all operations on the aircraft-fuel, arrivals and departures, maintenance, preheating. He also had charge of building and running the Beardmore auxiliary base for three spring-summer months of DF II. Mistakenly located that year at the foot of the Liv Glacier, the small temporary camp was a weather station and refueling stop for Pole-to-McMurdo flights. Baronick served in five Deep Freeze operations in all, through DF 60. He died in 2000.